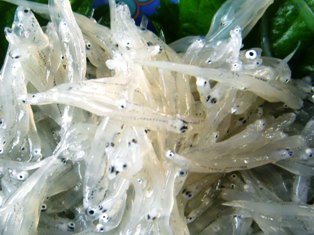 THere seems to exist a great confusion about two different fish in Japan that stumps even quite a few Japanese!
Actually there should not be any problem as they are caught in totally different: whereas “shirasu” is almost exclusively caught in Suruga Bay in Shizuoka Prefecture where the most important shirasu fishing harbour is in Mochimune, Shizuoka City.

“Shirasu” is whitebait, that is a fish in its infancy, of the “katakchi iwashi”, a sardine variety.
“Shirauo” is a totally different fish, usually called “Japanese anchovy” which is mainly caught in Kyushu and Kanto. The color and the size are different.

Most of the shirasu caught off Mochimune goes through the hands of the local dealers at the harbour.

Fresh it can be eaten on a gunkan with a dash ograted ginger, some finely chopped thin leeks and wasabi.

(Pic taken at Sushiko, Shizuoka City)
Or it can be served fresh as it is as “tsumami” (hors d’oeuvre) in ponzu and some fine greens. There are many variations according to the sushi chef!

Shirasu can also be dried like “sakura ebi” and put to many uses.

It can added to rice, mixed with dried shrimps, and so on!