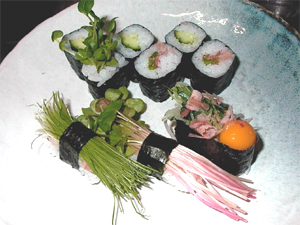 More sushi for vegetarians!
Can you recognize the plant?

Sashimi or thin slices of fish when put onto some rice could be called “sushi” as long as rice vinegar, salt and sugar have been added to season the rice beforehand.
On the other hand it does not have to be sashimi as almost anything could be used for making sushi: fish guts, roe, shellfish, meat, vegetables. etc.
Even the word “sashimi” does not actually apply to fish only as its meaning is “thin slices” (debatable).
There are 3 basic kinds of sushi:
“Nare Zushi”, or pickled fish sushi.
“Nigiri Sushi” or “Edomae Zushi”,or sliced fish et al onto small balls of rice.
“Oshi Zushi” or “Osaka Zushi”, or sliced fish et al pressed onto rice inside a wooden box or mould and then cut into equal-sized pieces.
Of course the three above kinds can be divided into numerous sub-varieties.
One important variety is “Chirashi Zushi”, basically all kinds of (available) ingredients, preferably small, strewn on a layer of rive inside a bowl or shallow Japanese dish. This last variety is commonly encountered at home meals when it is more practical for a housewife to serve to a whole family.

“NARE ZUSHI”
This is the original form of sushi in Japan. One way to preserve fish was to gut it, slice the meat with or without the skin and pickle it (ferment it) in rice. The fish could then always be presented at meals after having taken it out of the pickle jar, cleaned it and served it on a dish as an accompaniment (or main dish) to the usual Japanese fare of rice, miso (fermented beans) soup and pickles.
Then one day, somebody selling fish in Edo (old Tokyo) struck on the idea to serve it wrapped around balls of rice to which vinegar, salt and sugar had been added for preservation. These balls were 2 or 3 times as big as nowadays and 3 balls would be enough for a meal.
This form of sushi is rarely encountered or availabe these days. One modern extension of this technique is “Zuke” whereas tuna (“maguro”) or other fish has been first dipped in hot water for a while, then transfered into iced water to stop it cooking and finally marinated into a pickle brine (“tsuke shiru”) for a while. When cut, the surface is cooked and slightly harder while the inside is still soft and comparatively raw. If it is not dipped in brine it becomes “tataki”.
(Note: “Zuke” also means leaving the fish slices in a mixture of soy sauce, mirin and sake for about a certain amount of time begore making any kind of sushi. Each restaurant has its own original secrets and recipes.)

“NIGIRI ZUSHI”/”EDOMAE ZUSHI”
“Nigiri Zushi”, arguably the most popular kind of sushi, consists of a small hand-formed ball of rice, or more commonly called “shari”, seasoned with rice vinegar, salt and sugar covered with a slice of fish or other ingredients(defined as “neta” in Japanese).
Moreover, before covering the “shari” with the “neta”, a small portion of grated Japanese green horseradish (“wasabi”) is applied on top of the “shari” to be in contact with both the the “shari” nad “neta”. But this is not always the rule. Grated ginger and chopped chives can be applied on top of the “neta” or the “neta” could be seasoned with sauce (“tare” or “tsume”) or the horseradish could be applied on top of the “neta” (as in for “anago”=conger eel). In some cases, I myself like the “neta” sprinkled with a bit of salt and lemon juice as for “hirame”
( sole/flatfish).
The “nigiri zushi” can be then be dipped or not, according to your preference, into a small dish of soy sauce before eating it.
A “nigiri zushi” seasoned with “tare” or salt and lemon juice should not be dipped into soy sauce.
“Edomae Zushi”, apart of “nigiri zushi” comprises “te-maki zushi” (a sushi made inside dry seaweed in the form of a cone served in one piece),”ha-maki” (the same as “te-maki-zushi” but with lettuce instead of dry seaweed), “nori-maki”
(a long thin roll usually wrapped in dry seaweed, then cut in 2, 3 or 6 portions), “futo-maki” ( a thick roll wrapped in seaweed cut into thin slices), “inari zushi” (plain or mixed with some finely-cut ingredients seasoned rice wrapped inside fried toofu pouch, also known as “0-inari San”) , or “chakin zushi” (seasoned rice plain or mixed with other ingredients inside a pouch made of thin omelette).
The possibilities for “edomae zushi” are almost limitless.
Ome more variety made in Kyoto called “te-mari zushi” (small round “nigiri zushi”) ought to be mentioned as its shape is particularly beautiful and its size is popular with diet-conscious ladies!

“OSHI ZUSHI”/”OSAKA SUSHI”
This type of sushi is made from rice (“shari”) seasoned as in “edomae zushi” and then stuffed inside small wooden boxes, smeared or not with horseradish (“wasabi”). Finally thin slices of fish or else are carefully arranged on top usually so as to form a pattern. A wooden lid will then be pushed on top of the sushi to press it evenly and firmly. The sushi will be then slid out out of the box and cut into regular rectangular portions to be served accordingly to the chef’s taste and skill. 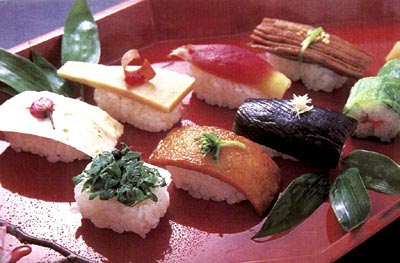 Sushi for vegetarians! Can you name them all?

In Shizuoka Prefecture, we are blessed not only with a large expanse of sea to be fished all year round, but also some of the best fresh vegetables available all year round, including the best wasabi (Japanese green horseradish).
I will endeavour to introduce all the sushi you can find here as well as the good sushi restaurants and prove we deserve the title of this blog!
I will also explain in plain (forgive the bad pun!) words what sushi is all about, even if I have to break some myths along the trail!
It will be a pleasure and honour to reply to all questions and queries, so do not hesitate!