Kuruma Ebi, or Japanese Imperial Prwan, is probably the most popular prawn in Japan!
It has different names depending on its size: Saimaki (up to 5 cm), Maki (up to 10cm)

Its season lasts from late Autumn to the end of Winter.
It is found south of Hokkaido Island down to the Indian Ocean until depths of 50 metres.
It had been successfully artificially grown for some time until diseases put a momentary stop.
The prawn has steadily become a rare morsel. Altogether, natural and human raised specimen, the annual catch amounts only to 2,000 tonnes.

boiled, they make for great decoration on top of suucculent taste!

They are very much appreciated a sashimi, especially after having been made to “dance” in Japanese sake!

Grilled on the stick would tempt many an officionado!

They make for extravagant tempura!

As sushi Nigiri, they are equally popular raw, or

If you the chance to buy tem alive (In shizuoka, we do have them kicking), put them in a pan with Japanese sake under a lid. Wait until they have grown “quiet”, and prepare them right away!

Ise Ebi, or Japanese Spiny Lobster is one the Spiny lobster varieties so popular all over the World.
The Japanese variety is smaller, or more precisely is more popular under a certain size.

Also called Kamakura Ebi, it is caught off the shores of Chiba, Wakayama, Mie and Shizuoka Prefectures.

The best specimens are aught in Winter, although imported lobsters can be found at other seasons.

The annual catch is fairly stable at 1,000 tonnes a year.
Imprted specimens account for 10,000 tonnes, mainly from Australia, New Zealand and New Caledonia.
In the case they are also called Minami/South Ebi.

The Japanese appreciate their lobsters raw.

As o-tsukuri/sashimi plate they are quite spectacular!

For a closer look!

And of course as sushi nigiri!

In Japan, it is also known as Hokkoku Akaebi/North Country Red Shrimp, Nanban Ebi or Tongarasahi.

The season in Japan is Winter, although it can be found all year round thanks to large imports from Greenland and Canada. Yearly domestic catch amount to 2,000 tonnes in Hokkaido and 800 tonnes in Ishikawa Prefecture.

It is a species famous for its sexual properties: the shrimps are hermaphroditic. They start out male, but after year or two, their testicles turn to ovaries and they complete their lives as females. However, if there is a predominance of female Pandalus shrimp, the males will delay their transformation. Likewise should there be a shortage of females, the male shrimp will begin their transformation earlier, all for the sake of maintaining balance for procreational purposes.

They are called “Ama Ebi/Sweet Shrimp” in Japanese as they will turn very sweet after a couple of days in the refrigerator, whereas they will show no sweetness at all when fresh!

They are great as sashimi on their own, in salads or as part of a larger sashimi plate such as served i Tomii in Shizuoka:

Of course, as sushi, they are a superb morsel! 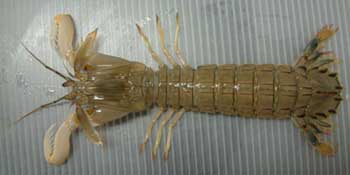 The Squilla or “Shako” (蝦蛄in Japanese) is a delicacy that appears on the sushi bar counters from April to Summer, although different varieties can be found in Hokkaido markets (Otaru City in particular) almost all year round.
You will discover it under names such as “Shaku” and “Gazaebi”.
They are actually caught in almost all Japanese seas, but the best are supposed to originate from Hokkaido.

Like any crustaceans, they can be eaten in many ways.
The Japanese favour the small kind with a violet back. I had the opportunity to buy some very large specimen in Otaru, and eat them just boiled and served with rice vinegar mixed with a little Japanese mustard, or in salads.
They almost disappeared from Tokyo Bay in the 1960’s but reappeared in the 1970’s. Most fishermen in the Kanto area will place them in boxes themselves to sell them directly at fish markets. The market value can vary wildly, but look for the genuine harbour markets and buy them yourself.

Naturally, they are most popular as nigiri sushi. Customers jokingly ask for “garage” (in English) as “shako” also means (different kanji, of course) “garage”! 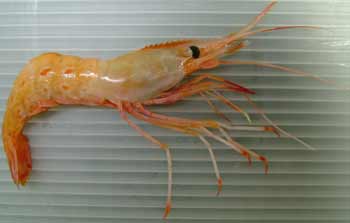 Botanebi/”Botan” Prawn, or “Pandalus nipponesis” for the specialists, is a large prawn found in all seas of Japan at depths varying from 300 to 500 metres. They are caught at 200~300 metres depth in Suruga Bay and along the Western coast of Izu Peninsula In Shizuoka Prefecture. Once abundant, they have become scarce and only small specimens are found, whereas Hokkaido produces up to 20cm-long prawns.

They are known under different names: “Toyamaebi and Kijiebi”.
It is not a cheap morsel in Sushi bars. But it is interesting to note they are essentially eaten raw as like “Amaebi”. They become very sweet after some time in the refrigerator.

Now, if you are lucky enough to find them fresh with their eggs, ask your chef to dress them as above, or even better, put the eggs on top of a “gunkan nigiri”!

And one more thing, if they are fresh again, don’t forget to ask for the heads deep-fried! 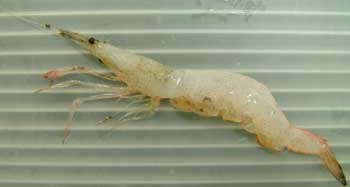 Having obtained more information and species, I decided to restart the Series on Crustaceans for the sake of secure information!

Shiroebi or White Shrimp is not as known as other shrimp/prawn varieties. However, it is a very popular crustacean in Japanese cuisine.
Also known under the the names of “Shiraebi, Hirataebi and Bekkoebi”, it is mainly caught between depths of 40 and 200 metres off the coasts of Toyama Bay on the other side of Japan and Suruga Bay in Shizuoka Prefecture.

as “gunkan” topped with a dash of grated fresh ginger.

It is possible to serve it as “nigiri”, although one would need large specimen, as the usual length is only 7 cm.
Shiroebi appears on our tables between April and November in many guises:

The picture above shows on the right the shiroebi in its natural flesh whereas on the left it has been kept between two sheets of wetted seaweed for a while as “kombu-jime”, another very popular way to prepare all kinds of sashimi/sushi.

White Shrimps also enter in the preparation of a kind of “Tamagoyaki”/Japanese Omelette when they are first processed into a paste and mixed thoroughly with beaten eggs, sieved and then cooked.
The Japanese also love them as soft sembei/rice crackers.

The annual catch has exceeded 600 tonnes in recent years, half of them in Toyama.
They are also exported whole.